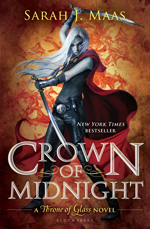 Crown of Midnight (Throne of Glass 2) by Sarah J. Maas

A line that should never be crossed is about to be breached.
It puts this entire castle in jeopardy—and the life of your friend.

From the throne of glass rules a king with a fist of iron and a soul as black as pitch. Assassin Celaena Sardothien won a brutal contest to become his Champion. Yet Celaena is far from loyal to the crown. She hides her secret vigilantly; she knows that the man she serves is bent on evil.

Keeping up the deadly charade becomes increasingly difficult when Celaena realizes she is not the only one seeking justice. As she tries to untangle the mysteries buried deep within the glass castle, her closest relationships suffer. It seems no one is above questioning her allegiances—not the Crown Prince Dorian; not Chaol, the Captain of the Guard; not even her best friend, Nehemia, a foreign princess with a rebel heart.

Then, one terrible night, the secrets they have all been keeping lead to an unspeakable tragedy. As Celaena’s world shatters, she will be forced to give up the very thing most precious to her and decide once and for all where her true loyalties lie…and whom she is ultimately willing to fight for. (back cover)

While this wasn’t bad, I didn’t like this as much as book 1. And surprisingly the action parts were the most boring ones in the book… Those were also the most ridiculous ones because she’s supposed to be this badass assassin, and in reality she’s too soft hearted and gets caught most often than not.

In the last book I thought Dorian was annoying and too superficial but he did grow up in this book. I don’t remember if we had his POV in the last book but at least in this one it worked well.

Even though I like Chaol, I can’t but wonder his stupidity at times. I think he trusts the king way too much and he should doubt more about what the king tells him. I’d like Chaol to be little more hardened especially since he’s the Captain of the Guard. But he’s still my favourite character.

Portrait of a Conspiracy by Donna Russo Morin

The Queen’s Pawn by Christy English

Prophecy of the Sisters by Michelle Zink