Goodbye for Now by M.J. Hollows 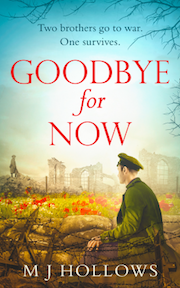 Goodbye for Now by M.J. Hollows

Two brothers, only one survives.

As Europe is torn apart by war, two brothers fight very different battles, and both could lose everything…

While George has always been the brother to rush towards the action, fast becoming a boy-soldier when war breaks out, Joe thinks differently. Refusing to fight, Joe stays behind as a conscientious objector battling against the propaganda.

On the Western front, George soon discovers that war is not the great adventure he was led to believe. Surrounded by mud, blood and horror his mindset begins to shift as he questions everything he was once sure of.

At home in Liverpool, Joe has his own war to win. Judged and imprisoned for his cowardice, he is determined to stand by his convictions, no matter the cost.

By the end of The Great War only one brother will survive, but which? (publisher)

George and Joe are brothers who at the break of World War I make very different decisions. George can’t wait to go to war and has a bit romanticized view of the war. Joe, on the other hand, is a pacifist who refuses to raise a hand to kill others. Their father is a Boer War veteran who doesn’t take Joe’s beliefs kindly.

Both brothers admit that they’re never been close and don’t have much in common, but they are concerned for each other’s well-being during the war which was great to see.

It was interesting to read about Joe’s time at home because I haven’t read much about the men who refused to go to war or the people’s treatment of conscientious objectors. He was branded as a coward, but I admire him for standing up to something he believed in.

It was a great debut book from the author and I really enjoyed reading it.

The Captive Queen by Alison Weir